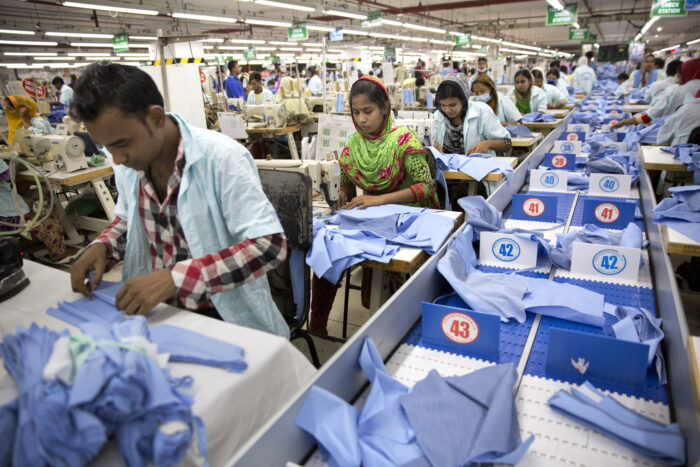 The Garment Industry Of Bangladesh

Introduction: The textile and clothing industries provide the single source of economic growth in Bangladesh’s rapidly developing economy. Exports of textiles and garments are the principal source of foreign exchange earnings Agriculture for domestic consumption is Bangladesh’s largest employment sector. By 2002 exports of textiles, clothing, and ready-made garments (RMG) accounted for 77% of Bangladesh’s total merchandise exports. By 2013, about 4 million people, mostly women, worked in Bangladesh’s $19 billion a year industry, export-oriented ready-made garment (RMG) industry.
History of RMG: 1950 was the beginning of R.MIG in the Western World. In order to control the level of imported RMG products from developing countries into developed countries, the Multi Fibre Agreement (MFA) was made in 1974. The MFA agreement imposed an export rate 6 percent increase every year from a developing country to a developed country. In the early 1980s, Bangladesh started receiving investment in the RMG sector. Some Bangladeshis received free training from the Korean Company Daewoo: After these workers came back to Bangladesh, many of them broke ties with the factory they were working for and started their own factories. But most of the RMG entrepreneurs are genuine patriots and started from the grassroots level who contributing to boosting of country’s economy.
Present scenario: Bangladesh is now the second-largest ready-made garments (RMG) manufacturer after China. By the next five years, Bangladesh will become the largest ready-made garments (RMG) manufacturer. Bangladesh was the sixth largest exporter of apparel in the world after China, the EU. Hong Kong, Turkey, and India in 2006. In 2006 Bangladesh’s share in the world apparel exports was 2.8%. The US was the largest single market with USS3.23 billion in exports, a 30% share in 2007. Today, the US remains the largest market for Bangladesh’s woven garments taking US$2.42 billion, a 47% share of Bangladesh’s total woven exports. The European Union remains the largest regional destination – Bangladesh exported US$5.36 billion in apparel: 50% of their total apparel exports. The
EU took a 61% share of Bangladeshi knitwear with US$3.36 billion exports: According to a 2011 report by international consulting firm McKinsey & Company, 80 percent of American and European clothing companies planned to move their outsourcing from China, where wages had risen, and were considering Bangladesh as the “next hot spot” making it the next China offering the lowest price possible known as the China Price, the hallmark of China’s incredibly cheap, ubiquitous manufacturers, much “dreaded by competitors.”
Women in the garment industry: The garment sector is the largest employer of women in Bangladesh. The garment sector has provided employment opportunities to women from the rural areas that previously did not have any opportunity to be part of the formal workforce. This has given women the chance to be financially independent and have a voice in the family because now they contribute financially.
However, women workers are facing many problems. Most women come from low-income families. The low wage of women workers and their compliance have enabled the industry to compete with the world market. Women are paid far less than men mainly due to their lack of education. Women are reluctant to unionize because factory owners threaten to fire them: Even though trade unionization is banned inside the Export Processing Zones (EPZ), the working environment is better than that of the majority of garment factories that operate outside the EPZs. But, pressure from buyers to abide by labor codes has enabled factories to maintain satisfactory working conditions.
Conclusion: Textiles industries play an important role in the economic life of Bangladesh. The sector provides employment to a workforce of 4.5 million and contributes 40 percent value addition to the manufacturing sector. Textiles as a whole play the most significant role in the alleviation of poverty provision of employment to rural women and the economic empowerment of women. The section provides 200,000 jobs in the waste recycling industry related to ready-made garments.