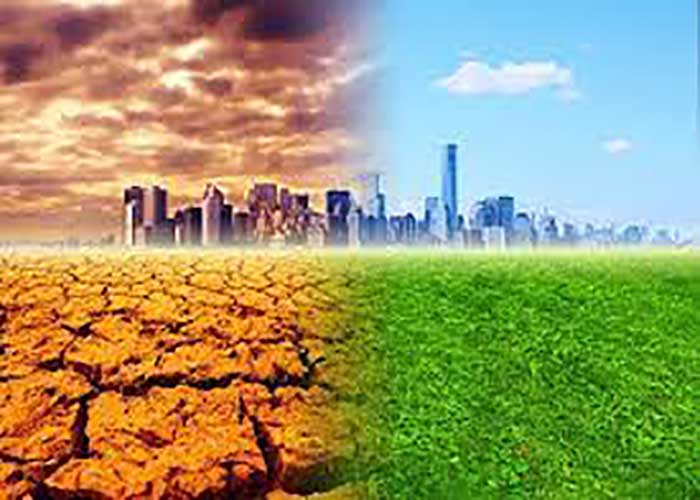 introduction: Bangladesh is one of the largest deltas in the world which is highly vulnerable to natural disasters because of its Geographical location, flat and low-lying landscape, population density, poverty, illiteracy, lack of institutional setup, etc. The total land area is hat 4 7.570^ prime sq. km. consists mostly of floodplains (almost 80%) leaving the major part of the country prone to flooding during the rainy season. Moreover, the adverse effects of climate change – especially high temperature, sea-level rise, cyclones, and storm surge, ‘salinity intrusion, heavy monsoon downpours, etc. have aggravated the overall economic development scenario of the country to a great extent.
Climatic Impacts: Bangladesh experiences different types of natural disasters almost every year because of global warming as well as climate change impacts, these are: floods, flash floods, cyclones and storm surges, salinity intrusion, extreme temperature, and draught, etc.
Impacts on agriculture: The overall impact of climate change on agricultural production in Bangladesh would be widespread and devastating for the country’s economy. Besides, other impacts of climate changes such as extreme temperature, drought, and salinity intrusion, etc are also responsible for the declining crop yields in Bangladesh. Temperature and rainfall change have already affected crop production in many parts of the country and the area of arable land has decreased to a great extent. The salinity intrusion in the coastal area is creating serious implications for the coastal land that was traditionally used for rice production.
Impacts on fisheries: The fisheries sector has also experienced an adverse effect because of the impacts of climate change. The fisheries sector contributes about 3.5% of the GDP in Bangladesh and people depend on fish products in order to meet up the majority of their daily protein requirements. There are around 200 species of fish in the country and almost all the varieties are sensitive to specific salt and freshwater conditions.
.
Coastal Areas: Almost a fourth of the total population of the country lives in the coastal areas of Bangladesh, where the majority of the population is somehow affected by tidal surges, river-bank erosion, divinity, tropical cyclones, etc. With the rise of Sea-level up to one meter only, Bangladesh could lose up to 15% of its land area under the seawater and around 30 million people living in the coastal areas of Bangladesh could become refugees because of climate change impacts. Agriculture. industry, infrastructure, livelihoods, marine resources, forestry, biodiversity, human health, and other utility services will suffer severely because of the same. Salinity intrusion from the Bay of Bengal already penetrates 100 kilometers inside the country during the dry season and the climate change in its gradual process is likely to deteriorate the existing scenario to a great extent. Since most of the country is less than 10 meters above Sea level and almost 10% of the population of the country is living below 1-meter elevation – the whole coastal area is highly vulnerable to high tides and storm surges. Moreover, the Bay of Bengal is located at the tip of the north Indian Ocean, where severe cyclonic storms, as well as long tidal waves, are frequently generated and hit the coastline with severe impacts because of the shallow as well as the conical shape of the Bay near Bangladesh.
Conclusion: Bangladesh should have an aim at building the resilience of coastal communities along the Bay of Bengal by increasing their adaptability to prepare for and adapt to the impacts of hazards of climate change. There is consent needed to control the climate changes among the countries of the world, which are main contributors of climate changes through the emission of huge amount greenhouse gases otherwise, nobody knows how much sorrow is waiting for us and for our environment in the near future if this trend of climate changes is going on.