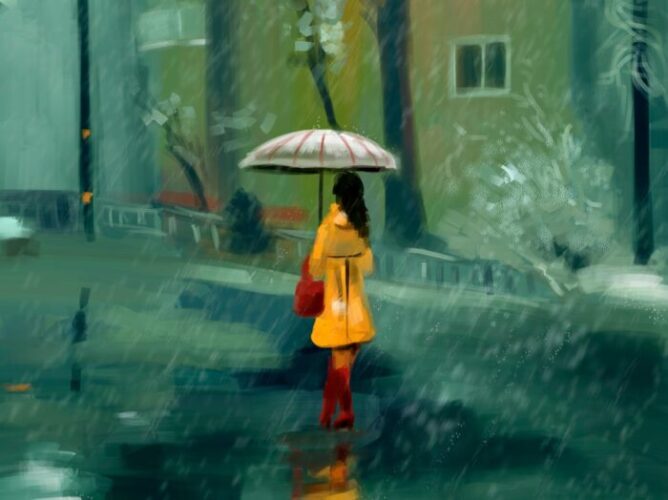 Introduction: Bangladesh is the playground of nature. Here different beauties come at different times. That means in different seasons Bangladesh is decorated with different beauties. Each season has its own features.
Six seasons in Bangladesh: In Bangladesh, we have six seasons in a year; summer, rains, autumn, late autumn or the dewy season, winter and spring.
Summer and its features: Summer is the hottest season. It is a season when one gets sweat and thirst. The heat of the searching sun becomes unbearable at noon. In this season, nature looks dry and lifeless. Cholera breaks out here and there. But summer has its boons also. Mangoes, jack-fruits, and some other fruits of Bangladesh ripen (c) in this season.
The rainy season: The rainy season stays in Bangladesh during the months of Ashar and Shravan. A cloudy sky, a wet day, muddy (fare) roads, and ponds full of water are the sights of this season. During the rains, the rivers become full and sometimes overflow the banks. Many villages lie under flood-water over
The autumn: The cloudy sky clears up when autumn comes in the months of Bhadra and Aswin. The jute becomes available in the market this season. Harvesting of Aus crops begins. The paddy begins to In this season, the Hindu’s Durga puja comes off.
The late autumn: It is the season of dew. The farmers are busy harvesting Amon paddy. They perform the Nabanna. It also hints at the arrival of winter.
The winter: Winter comes with its fog and chill out. Then nature seems dull. Trees turn gray and shed their leaves. The sky becomes clear and blue. Vegetables grow much in winter. It is the season of ‘gur’ and ‘patali.
The spring: Last of all comes the spring season. Neither too hot nor too cold, it is the brightest season. It is loved by all. A gentle breeze blows (trees om). It is the season of happiness and joy. Thus the seasons come and go.
Conclusion: Every year Bangladesh is visited by six seasons. These seasons influence (es) the people in different ways. The changes that are brought in our country by the six seasons have made our country attractive. Thus the six seasons have made Bangladesh The Queen of all the countries in the world.