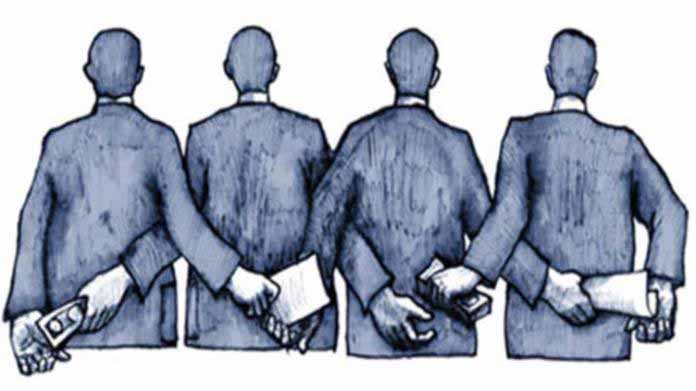 Introduction: Literally corruption means dishonest or wicked behaviors. It also means bribery. As perceived in law, a man of authority who acts dishonesty in return for money or personal gain is corrupt. So an organization (it) with such corrupt men is sure to be corrupt and spoiled General
welfare and progress of the people suffer.
The present condition of corruption: Almost every sector including education, business, medical is corrupted by those evil people. They want to fulfill their own desires by any means. Thus they are engaged in many illegal activities But the common people of our country are the worst suffers from corruption.
Bad effects of corruption in our economics: As the corrupted persons always think of their own desire and personal gain. They do not care about the development of our whole economic condition. As a• result, the economic condition of our country cannot keep pace with other developing countries such as India, China, Malaysia, Thailand. So for the development of our economic condition we have to stop corruption from every sector strictly.
How to prevent corruption: We can prevent corruption by screening out the corrupt people from the GOI / NGOs. At the same time, honest officers and employees who will stand against corruption should be employed in different sectors. Our law and enforcing agencies should be aware of the corruption, Educated people should come forward to be aware of the people about corruption. To evoke social and political condemnation we should launch a massive campaign against corruption.
Steps taken by the government: The Government of the Peoples Republic of Bangladesh is trying to stop corruption from different sectors. The Government made a law namely “Durniti Domon Commission Aine -2004”. In it three-member commission will be formed with a chairman and the members will be selected as a committee formed by the President, the government also made a law named “The Anti-corruption Act, 1957.
Conclusion: If a country is full of corrupt people, the country will not be developed for its illegal and dishonest activities. So for the development of country government as well as the aware people should come forward to prevent corruption.